The Bo-Kaap struggle has reached the media. We have seen the national and local police acting directly against the citizens to defend the speculators’ private interest, and we have seen developers use private security companies not only to physical defend their proprieties, but also to patrol streets and public spaces to protect their wider interests. At the same time we witnessed the attempt to privatise and control access to public spaces, as in the case of Clifton Beach and Maiden’s Cove. The perception is that a portion of affluent residents of those areas believe that they can make transform public land into their own private State.
Bo-Kaap protesters cheered as a construction crane left the suburb today.

Zooming out of our city to catch a glimpse of what moves at international level: the Yellow Jackets’ movement in France demonstrated that a citizens’ movement has the power to paralyse the State. Without entering in details on this multifaceted movement, the element that I want to focus on is that in response to the protest President Macron called all French citizens into a national consultation called Grand Debate (The Great Debate). The Grand Debate focuses on four very serious themes: tax and public spending; state organisation and public services; ecological transition; democracy and citizenship.
Yellow Jackets’ movement in France. 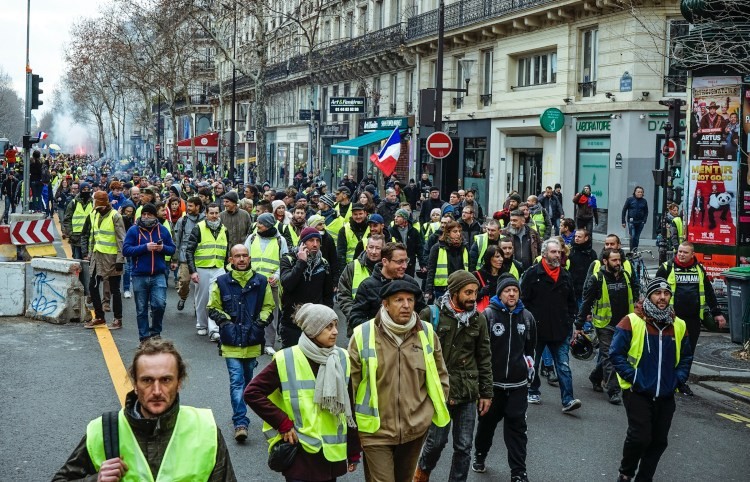 Photo by Norbu Gyachung on Unsplash

The recent protests, from Bo-Kaap to Paris, tell us that there is a global crisis. It is a governability crisis, a capacity crisis, and a failure of the political system to represent the interests of large sectors of citizens. The crucial point here is the way we frame this narrative: is this a leadership crisis? A crisis of political parties? Is it owed to a corrupted political leadership? Without dismissing any of those elements, I think that we are indeed facing a crisis of representative democracy. This is not just a South African issue, it touches many countries around the world.

On this subject I want to share what Simon Tormey wrote in his 2016 essay, The Contemporary Crisis of Representative Democracy: “Perhaps a more telling measure of the decline of representative democracy is the decline of party membership. Parties are the crucial point of mediation between citizens and the institutions of governance and are thus a vital measure of health as far as political engagement is concerned. Again, the picture is clear. In the 1960s it was common to see around 30 per cent of the voting population in the advanced democracies as members of political parties. Today we see a fraction of that figure, often as low as one to two per cent of the voting population. Citizens are deserting political parties in droves. The result is that parties are forced to huddle up to other sources of financial support, notably corporations and private benefactors. This feeds the problem of distance from the ordinary citizen, creating a vicious circle. The closer they get to business, the less they seem to care about the needs and wishes of the ordinary voter, or indeed party member.”

The crisis of the Representative Democracy model arises from processes of economic globalisation that have put into question the powers of the nation states. New international structures for the management of economic and political relations have grown, alliances of large economic groups have created economic oligarchies, international structures of arbitration determine the rules of the game. The particularity of these new structures is that they act outside of any democratic control and often beyond the control of individual states, which need to group and form alliances in order to determine some choices. Nation states are, in fact, in danger of transform into structures that literally sell their country to the highest bidder, in constant competition to attract international investments.

Reforming a party or building a new one are not effective solutions in my view. I am convinced that this is a system crisis, and these actions would therefore not address the real reasons of this crisis. Considering it a crisis of the democracy system, forces us to re-imagine decentralised bottom-up democratic systems that can offer more citizen participation and ownership than what we currently see; systems that give to the citizens greater democratic control on the place where they live. We need to imagine new ways to manage our society — in other words we need to invent a new democratic system. A new democratic participatory model.

This brings us to the questions: what can we do? What can we do as civic organisations, what is our role in this context?

I believe that there are at least three major elements in this discourse:

Specific contents and issues: how do we preserve Bo-Kaap heritage? How do we protect our public spaces? How do we imagine Maidens’ Cove as a common. How do we develop effective social housing projects. How do we defend our City from the developers, speculations, and City capture? The list goes on, to include issues linked to a definite context. This is the level of public mobilisation and advocacy.
Democracy and processes: how do we imagine new ways to organise the City municipal structure to promote new participatory processes and new democratic institutions? We as civic organisations must have the capacity to enter into questions and propose solutions, as we did with the proposal of a new by-law on public participation. For example: how do we re-imagine the powers and responsibilities of local councillors? Which parts of the City regulation shall we propose to change? And in which way we want to change it? What rules and laws do we need to change? And what are the processes necessary to achieve these changes?
Our local constituency as civic associations, our communities, and our neighbourhoods. How do we activate community building processes? How can we spark a process of citizen involvement in re-imagining our communities? How do we replicate in every neighbourhood the “Re-Imagining Mitchell’s Plain Summit” organised by United Residents’ Association (MURA) and Development Action Group (DAG)? How do we shift the discussion from a common re-imagining to a specific Local Action Plan? One example: Promoting a Community Learning Plan to ensure that education and training are available and accessible to our community and provide the necessary knowledge and skills. A Community Learning Plan that recognise civic education as essential to sustaining participatory democracy, a civic education that starts from ECD level up to Adult Education and Lifelong Learning level.

These three elements are, of course, interconnected, yet each of them requires activities, skills, and specific structures in order to yield results. No level that is more important than the other; they are all important and necessary, and we need to work on all three at the same time. I invite you to share your views on those three elements, and to add more if you feel that I missed something crucial.

This conversation is not a local discussion based on the South African framework; it is a global issue that many citizens around the word are addressing. The Civic associations in Cape Town affirmed: “We believe it is important to recognise our City as a Common. The principal function of our City is to be the common house of all the people who live here, the place where social life is built, where the varying needs and interests of different people and groups are discussed and compared and where conflicts are managed — a process that is integral to the social life of a city.” (Manifesto for a new Civic Participation Bylaw in Cape Town)

While we imagine a new democratic participatory system we cannot avoid to re-think how our civic associations are constituted and organised. For example: should civic associations only be constituted by citizens? What about organised citizens? That would make civics at the same time, citizen based associations as well as and a network based association. Let’s also look at The classic civic structure: General Meeting, Management Committee and Chairperson: is this really the most adequate structure to promote our agenda? Perhaps we should not imitate the current functioning of the city, Council, Mayco and Mayor… Imagining new legal structures for the civics prefigures a different idea of democracy. And of course, while I recognise the importance of coordination structures of civic associations at city level, I also think that we should re-imagine centralised coordination structures that are, paradoxically, de-centralised (perhaps working by themes?…).

This article is licensed under a Creative Commons Attribution-NoDerivatives 4.0 International License.

You may republish this article, so long as you credit the authors, and do not change the text. Please include a link back to the original article.