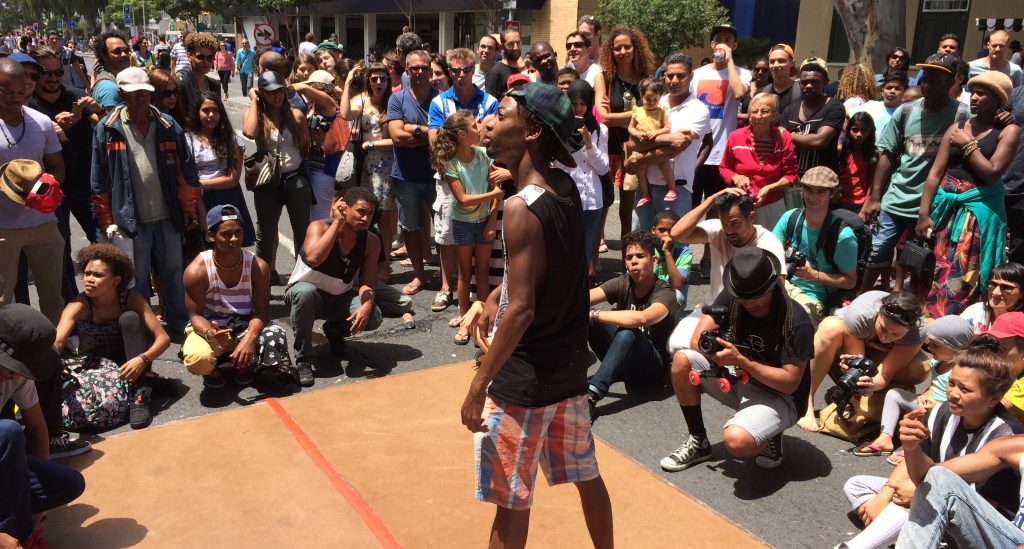 The amazing success of Open Street Festival in Bree Street on 18th January 2015 highlighted the great need for public spaces felt in Cape Town – and probably elsewhere in the country.

One key aspect of the Open Street lies in self-organisation: the initiative deliberately only offers a framework event, while it is up to the locals (workers, shop-owners, residents, and visitors alike) bring it to life by organising additional activities. This brings together in the same shared space people from all walks of life and organised groups: businesses, NGOs, schools, artists and informal groups of people that wants to organise something together specifically for the Open Street event. Open Street can therefore be seen as background for sharing stories and as a place where social complexity can be nourished and nurtured.

The complexity of social mix is a resilience aspect of our society: a more varied mix can contribute to the overall health of communities by favouring exchanges and creating fertile ground for social innovation. Social mix is a particularly important terrain for the new generations. To have as neighbours people from different social and professional backgrounds – workers, plumbers, business people, scientists, artists, etc. – enables young people to imagine a future for themselves that may differ from the example, experiences and expectations of their family. Growing up in a socially mixed environment means going to school with children that have a different background, sharing and negotiating spaces, roads, skateboards and bicycles, playing and arguing with each other. In other words it means to articulate social relationships.

Obviously public spaces are not the only element in a healthy social mix: there are other important elements such as the type of  industrial, commercial and living spaces in a specific city or region, the public transport system, the policies of economic development as well as social and health policies, and the policies of taxation on land, housing and commercial activities. But, undoubtedly, public spaces are often focal points as well as sites of discussion and conflict around which other important elements revolve. Focussing on the way in which a city uses – or not uses – public spaces is also a revealing tool that assists us in looking at how that city structures its relationships with different social groups, and the power relations between those social groups. This is crucially important in a city like Cape Town where the legacy of the past marks heavily the present, a city whose stories, events and facts can have opposite meanings depending on the background of the individuals looking at them.

In recent years the City of Cape Town has placed much effort in developing usable public spaces and a walking-friendly city centre. This seems to happen, however, within a contradictory dynamic between regenerating public spaces and excluding part of the people that uses them. I believe that – besides the obvious aspects of physical requalification of the spaces – other factors need to be taken into consideration. Solutions that reduce social complexity, that is, solutions that resolve problems by excluding someone, reduce the resilience of society.

What should be, in practice, the policies and practical tools that public administrations and civil society can use to deal with changes and conflicts in a perspective of inclusiveness? I think that it would be interesting to open a discussion on two elements, which could be used to initiate processes of public participation and co-design as well: the management of public parks and the management of public markets.

The management of public parks by non-profit organizations: could public parks be not only aesthetically beautiful, pleasant and safe, but also places of economic exchange? It would be interesting to explore how public parks can become opportunities for economic development. To avoid the risk of being seen as an attempt to privatize public spaces and resources it is necessary to move away from the idea that economic development means just the development of private, for-profit activities, and look at other forms of economy;

Rethinking the way in which the spaces hosting public markets and commercial activities are managed: for example entrusting their management to non-profit entities aiming at the promotion of small business. This may include, for example, ensuring a mix of different activities and actions supporting the passage from informal to a formal economy. The call issued by Citymart and the City of Cape Town to strengthen the city’s informal trading sector could be, for example, an appropriate space to propose some alternative models. Read the call here: http://my.citymart.com/Call/CoCT_economic_innovation/empowering_informal_sector

Projects realised in other countries may also offer precious insights to rethink the management of public spaces in Cape Town. I found an interesting list of projects in the website of Project for Public Spaces, an association founded in 1975 to expand on the work of William (Holly) Whyte, author of The Social Life of Small Urban Spaces. Read the projects here:  http://www.pps.org/projects/project-categories/featured-projects/